One thing I've learned working in public health is that disease and risk -- like economic disadvantage--  are not evenly distributed among populations.  The series of maps below (tip of the hat to my colleague, Tracy Pugh for putting these NYC Dept. of Health and Mental Hygiene & NYC Justice Mapping Center maps together) show that public health problems tend to cluster in certain neighborhoods.  Not coincidentally, these are the same neighborhoods that have both low income and high rates of drug-related arrests.  These (also not coincidentally) happen to be neighborhoods where lots of  people of color live.  The Columbia Graduate School of Architecture, Planning and Preservation zoomed in on one these poor neighborhoods in Brooklyn in a project called "million dollar blocks" (which, parenthetically, made it into a MoMA design exhibit).  As they say on their website:

"Using rarely accessible data from the criminal justice system, the Spatial Information Design Lab and the Justice Mapping Center have created maps of these “million dollar blocks” and of the city-prison-city-prison migration flow for five of the nation’s cities. The maps suggest that the criminal justice system has become the predominant government institution in these communities and that public investment in this system has resulted in significant costs to other elements of our civic infrastructure — education, housing, health, and family. Prisons and jails form the distant exostructure of many American cities today."

Million dollar blocks are those where more then a million has been spent on incarcerating residents of that block.  This important work begs the question:  how could we improve the health of these neighborhoods if we invested a million dollars into community development, jobs, or education ... instead of incarceration?  How many public health problems could be solved?


NYC Community Health Survey 2008: Percentage of an onset of asthma in the last year by neighborhood 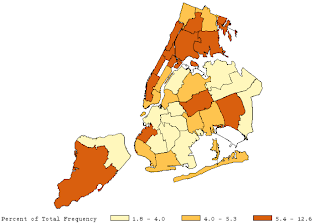 NYC Community Health Survey 2008: Percentage of population ever been told having diabetes by neighborhood 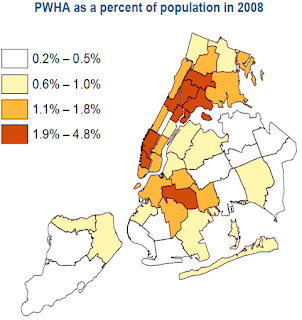 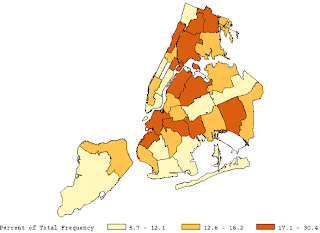 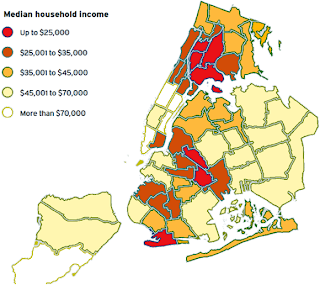 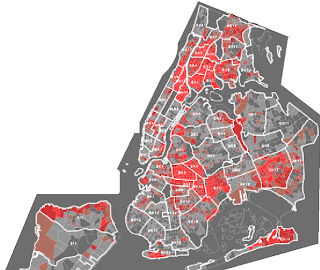 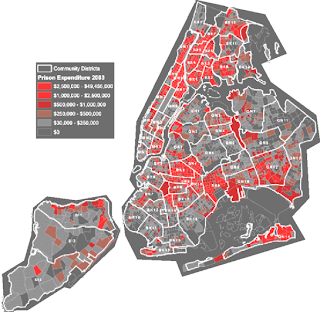 Posted by Julie Netherland at 7:06 PM